It’s a jungle out here! 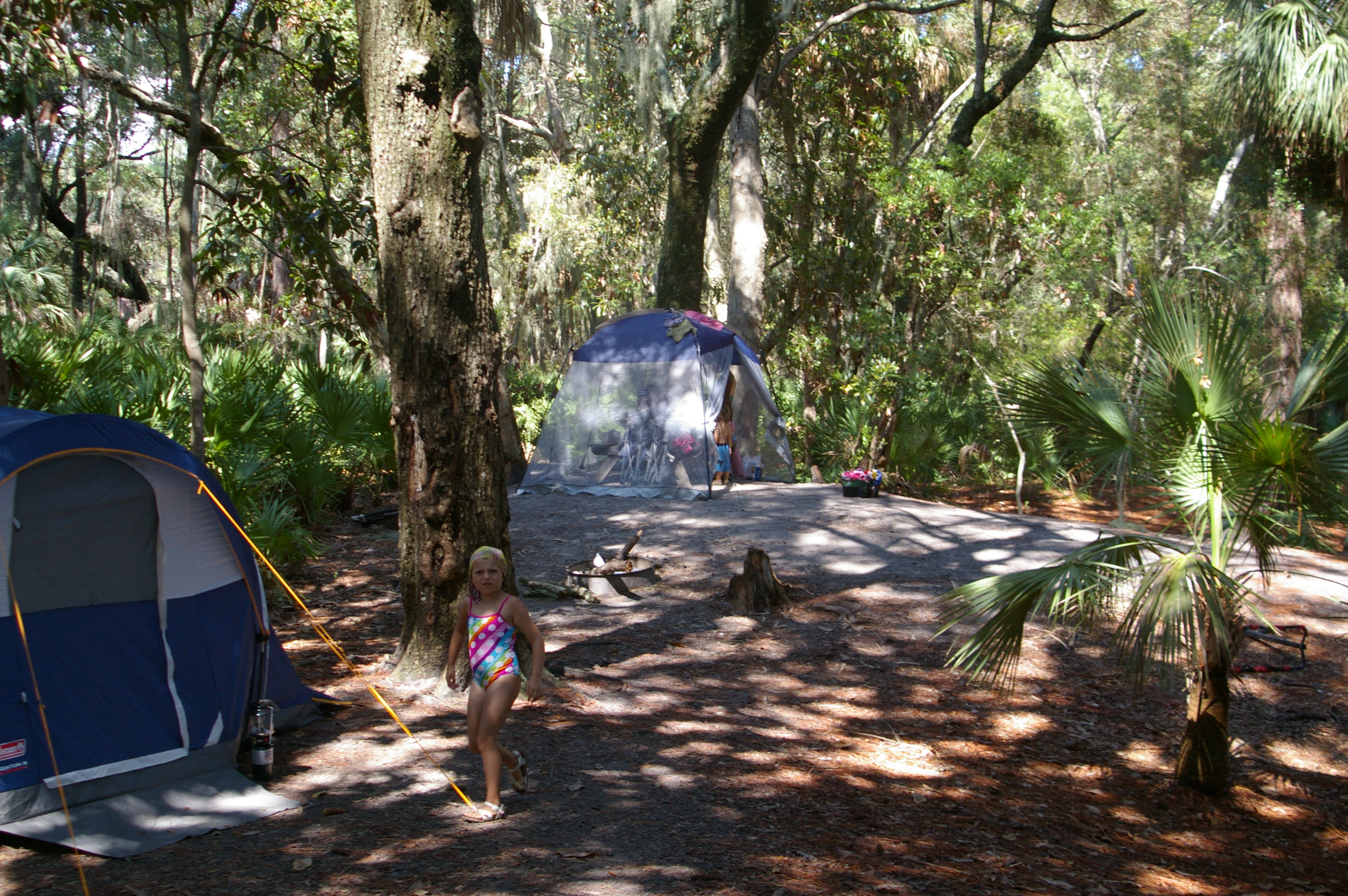 It was raining the whole day. When we were packing our gear in Cheraw, we folded the tent all wet stuck it together with other soaked items into the roof rack. That’s a proven technique by now. Whatever’s dry and has to stay that way rides in the car, moist and dump equipment rides on the roof. There is only one problem. The roof rack has two locks for which, we’ve lost the keys. Instead, we use a bright orange heavy duty strap. Well, at least most of the time we do…

That day we were in such a hurry to leave for our next destination that we’ve forgotten to secure the luggage on top of the car. That proved to be an excellent recipe for disaster. At 70 mph, on an interstate, in the middle of a storm, the roof rack does not want to stay closed. At some point I’ve heard a strange sound from above and a moment later I saw something in the rear view mirror. We either hit a bird, or the damn roof trunk failed. Well, obviously there are only a few birds crazy enough to challenge a tropical storm, so it must have been the later. I stopped immediately, which in such conditions means about half a minute or mile further. The roof rack was open and our tarp was ready for take-off. I checked the rest of the items and concluded that we’ve lost at least the bag with tent poles, hopefully not more.

The big question was, do I risk my life and walk back half a mile in pouring rain on a busy interstate to retrieve a bag of poles? Even if they’re still intact, I decided a $79.95 is not worth the hustle. We drove off and bought a new tent at the next Walmart. This one isn’t as nice as the one we lost, but is more or less the same size. Just more complicated to setup and fold down. Oh well…

When we eventually got to the Hunting Island State Park, the sun started to peak out from behind an overcast sky. We couldn’t wait to get to the beach, so we quickly hauled all our gear to a site about 100 yards from the parking lot. The camp site itself looks like a set from “Off the Map”. It’s South Carolina, and yet it’s a jungle. It’s nested in the middle of a forest, with pines, focuses and palm trees all around. It looked terrific.

When we got to the beach, it was already after sunset. That obviously didn’t stop me or the kids from getting completely wet and then covered with sand. An hour after dark, we decided we’re hungry and got back to our site. Riding the bikes in complete darkness wasn’t easy, but we made it safe. Due to the rain earlier, all wood was soaking wet, which proved to be really difficult to start the camp fire. Especially with an empty lighter and wet matches. I managed to burn my finger in the process, but finally called it a success. For about ten minutes, as this is how much wood we’ve collected to fuel the fire.

While fiddling with the campfire, we’ve heard some disturbing noises from nearby bushes. Apparently we weren’t alone in this site and our animal neighbors were having a rather laud domestic dispute. Turned out we set up our camp in the middle of a raccoon territory. When we were getting acquainted with the Ocean, those little fellows already visited our kitchen tent. Missing bag of roasted peanuts gave as the clue…

With no campfire and no snacks, we decided to call it a day and retired to the tent about 10PM. That however, does not meant we got to sleep longer than usual. Apparently, it wasn’t just one family of raccoons, more like a few hordes. I had to step out from the tent to rescue our supplies. In just few trips, I hauled everything back to the car, leaving only some pots and mugs in the kitchen tent. Let me just add that this was the evening when my favorite miners lamp also decided to quit. Believe me, it’s not a pleasant experience to evacuate food in complete darkness surrounded by a bunch of hungry animals.

When I got back to the tent, the kids were already asleep, which is a very good thing. I couldn’t force myself to slander listening to the noises outside. Raccoons were obviously quite displeased with my actions, but did not surrender hope. Maybe not very intelligent, they don’t lack perseverance. It took them all night and several repeated attempts at our empty mugs and pots to realize that the food was actually gone. On top of that, the regular sounds of a sub-tropical forest are quite different from what we are accustomed. A falling oak leaf doesn’t make much noise, but imagine a palm tree leaf. Or imagine multiple palm trees shedding their leaves all at the same time in the middle of the night. Add the squirrels running around and throwing pine cones at your tent, bats, owls, deer and God only knows what other night creatures. Supposedly the alligators live nearby too…

While I was trying to fall asleep, listening to a cacophony of noises, suddenly I heard a bear snore right next to me. Apparently , my wife was real tired and just couldn’t care less about the jungle outside…

One thought on “It’s a jungle out here!”