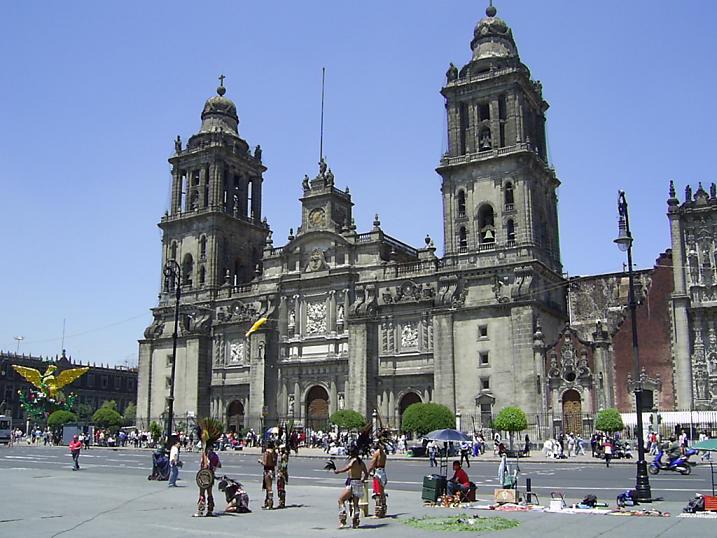 Sitting at San Carlos’ oceanside, getting ready to leave the country, I’m realizing how many posts from our travels around this country remain unwritten to this day. I think I wanted to make them special, just as the places we visited, but in the influx of activities, they just remained forgotten. We’ve got the pictures uploaded to Picasa, so it would be a great shame if I didn’t at least post them.

So chronologically, after visiting Cholula and Teotihuacan, we arrived at Mexico’s capital. Obviously we’ve been warned about odd and even days driving allowances, speed kidnappings, pickpockets and thousands of other dangers in Mexico City. Fortunately, we’ve been spared any of them. We found a nice, inexpensive, little hotel in downtown and used it as a base for our unlawful escapades throughout the city.

I have to admit, driving in Mexico City is no fun, especially downtown where it is easy to get stuck in traffic jams on the narrow one way streets. But with a little imagination and vigor, you can easily maneuver your way out of almost any trouble. Driving in Mexico, just like driving in any large city is about concentration and… charisma. You just need to be less of a gentleman and remember that the traffic speeds are much slower than on a highway…

During our stay, we had just about enough time to visit El Zocalo, the city’s main square with Templo Mayor (remains of an old Aztec temple), Palacio Nacional (presidential palace, full of shiny objects and decorated with Diego Riviera’s murals) and the Cathedral, then took a subway to the Bosque de Chapultepec, where we took a long walk in the park, but also visited the Museum of Anthropology (the Maya “calendar” anyone?) and Papalote Museo Del Nino (a cross over between a movie theather, planetarium, museum of science, museum of play and a huge playground). Following my wife’s “strong suggestion”, we also spent a few hours in Casa Azul, the house where Frida Kahlo used to live with her husband Diego Riviera (and for some time also with Leon Trotsky).

Nadia and Alex standing under the Piedra del Sol.

Agnieszka with the Piedra del Sol

We’ve only seen a small fraction of all the tourist attractions Mexico City has to offer. In order to visit all of them, we would need not three days, but probably three years… I think we will need to come back for more!