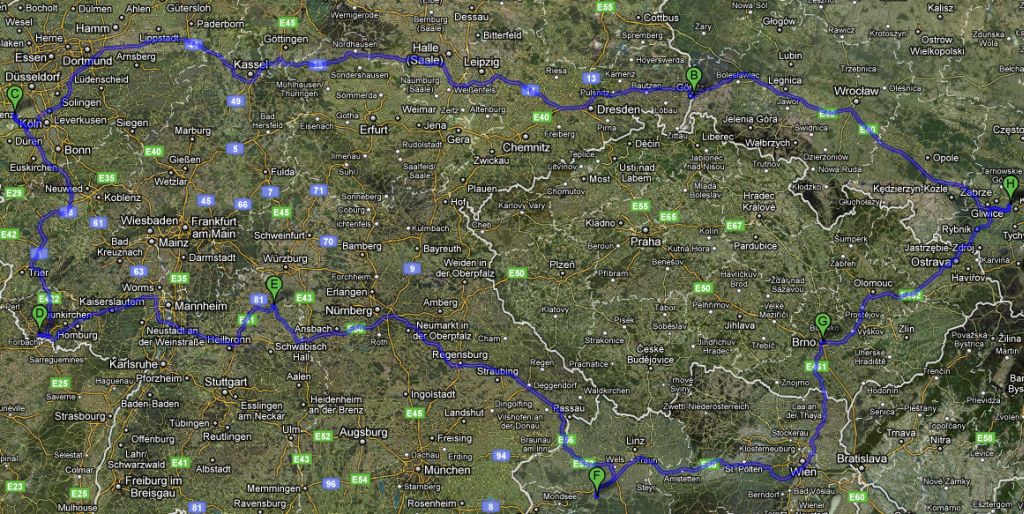 After a few days of partying, it’s time to start road trip planning. My Father offered us one of his vehicles, which means that we can do a small loop around Europe. We don’t want to spend on the road more than couple or three weeks, so the loop will be rather tight. Especially, as we plan to stick with our kids friendly driving habits. That means no longer then four or five hours of driving a day. In order to accomplish that task, we’ve decided to look at the map, see where do we have Friends or Family and plan around that locations. We will take some camping gear for those parts of the trip where there will be no friendly accommodation available.

Since large part of my Family is German, the route will be mostly around Germany, but also Austria and the Czech Republic. We will start by visiting my wife’s Family in Zgorzelec – that’s still in Poland, but it’s a German border town. From there we will go to the region of North Rhine-Westphalia, where lives a large part of my Family, but also number of old friends. We may need to overnight near Leipzig, as this leg of the trip will be significantly longer than the daily allowance set by the Captain. Then we will turn South and drive through Luxembourg to visit my Father’s sister in Saarland, near the French border. After few days of recovery, we will head towards Austria, where my Father’s brother lives in a picturesque little village. Again, due to the limitations set by the Captain, we may need to overnight at my wife’s friend house half way to Austria and then again somewhere in the Czech Republic (most probably around Brno) before arriving back at my Parents house.

And you can make a quick trip to visit our Katowice factory as you won’t be too far… just kidding.
Are you going to see Krakow at all?

Probably one of the only ALSTOM sites I have never been to. So, the Champi family will be soon on the road (but not as long as you!!) for a trip in Europe (Swiss,Italy, Croatie). We plan on coming back via “Autriche/Germany” directly west to Paris. Our road should be more south than yours, via Munchen… Anyway, Watch out for RVs with French plate on the road, that may be us !!

Tip: There is a salt mine at the german border west of Salzburg. If you have spare time for a detour, I highly recommend. Kids (and parents) will love the mini train and the huge “toboggans” made of wood to go down!! – Only place you will ever cross a border through a tunnel, without customs. 😉