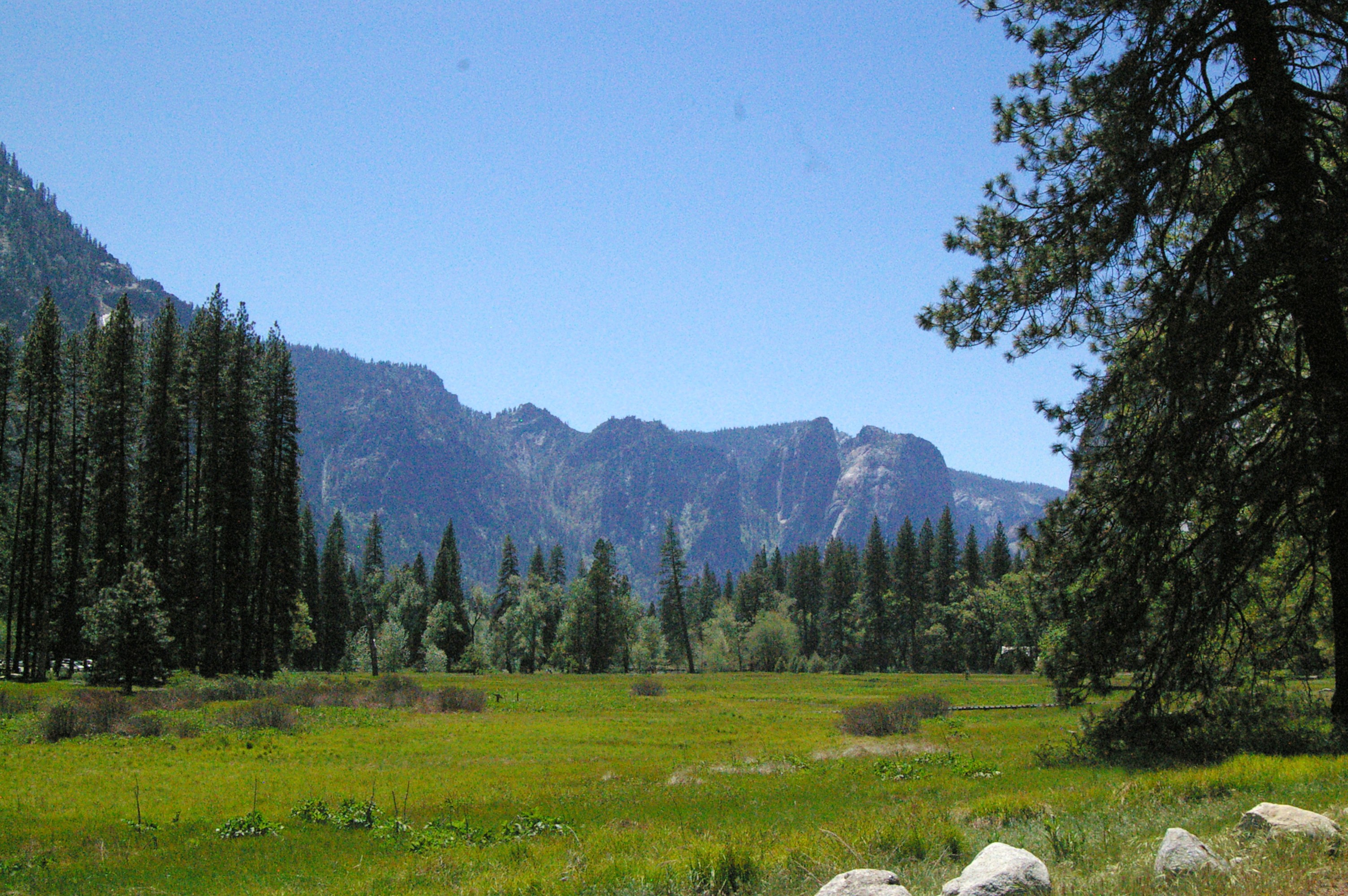 After freezing experience at Sequoya and Kings Canyon National Park we chased the hot weather to Millerton Lake State Park near Fresno, CA. It did not disappoint, it was very nice. Warm enough to sleep in t-shirts and shorts again:-) After doing pretty much nothing for few days, we headed to Yosemite National Park.

We have seen so many beautiful movies filmed in this gorgeous park… It is very extensive, full of breathtaking waterfalls, granite mountains, pristine forests and wildlife.

Prepared to freeze our butts off again we decided to compromise and stay for one night and later decide if we want to stay longer. We entered the park, but it was still a long drive before we got to any kind of camp ground or visitor’s center. Long, winding road in front of us made me very sick immediately. I have a terrible motion sickness disease, so as much as I love the mountains driving there is not my favorite activity.

We get to the Valley and it is as busy as Time Square on a week day. The traffic is annoying, parking lots are full and hungry crowds with professional cameras shooting every squirrel, every bird, every inch of the park.

We went to the reservation office just in time to find out that all the campgrounds in the Valley were full and have a mile long waiting list. The only option left for us was a spot for one night on a campground located on the west side of the park, 45 min drive from all the action. What could we do , we took it. Whoo hoo, more driving… 🙁

On our way there we found ourselves accepting the fact that our visit was going to be very short. Robert, who’s high hopes for some serious hiking vanished immediately had the hardest time accepting.

The regrets were still showing on our faces while setting up the camp. The toughest part was that the decision was not made by us but the thousands of people from all over the world who decided to show up at the same time and spoil our idyllic sabbatical. What happened to the economical crisis in Europe?! The park is full of people from France and Germany…

After all was in place, we decided to head to Hatch Hatchy, a nearby reservoir – much less visited location in Yosemite. While driving, it was obvious that it is not so popular amongst tourists, the road was ours – no cars around. Moving forward, while the sun was slowly going down, I look to the side of the road to find a… BEAR trying to cross to the other side. Yes, a BEAR!!! We have never seen a bear out in the wild before. Our van is coming to life. Everyone is screaming with excitement looking at the beautiful animal moving slowly to the other side. I could not believe it! We even managed to take some photos since the camera, thanks to Robert is always ready and in the same spot:-) That was it, it changed our mood completely, thankful for what we just experienced.

Taking another curve, still discussing the bear we were surprised AGAIN, because crossing the road the other way around was a… MOUNTAIN LION!! This unbelievably gorgeous animal, very secretive in fact, decided to make an appearance right in front of us. It was completely unexpected, even for the lion since he tripped on the side of the road, very unusual for this graciously moving cat. He quickly went up seeking space, but then he stopped, turned and posed for us from a safe distance. I almost had to climb the car’s roof to take that photo, but it was surely worth all the acrobatics. I could have left Yosemite then, with no regrets. Looking in the eyes of those animals, seeing them in their natural habitat was one of a kind, unusual experience.

The next day we managed to go for a short, crowded hike and we also did some sightseeing but to me, the encounter with those rare animals will always be the best experience of Yosemite:-)